Yeah how do I do this best, now? My documents are in german, so how do I talk about it with least amount of work?

Hmm. Let's just assume for the sake of this post that my dungeon is almost empty and if it's relevant to tell whats in a room, I will. Okay? Okay.

The two last points are directly derived from the first, so we don't have to do a lot of things to show its dynamic quality.

-I will do following procedure to repopulate:
-rewrite the small random-encounter table for this small dungeon.
-Pick one bigger room as the lair for the new faction
-Maybe pick a room or two to insert my own ideas
-write a small "Special" table for the dungeon room contents that will be appropriate for faction warfare
-use the b/x dungeon room random contents table to iterate over each explored room in the dungeon.

With this in mind, let's start!

This is my old wandering monster table. I know. Pretty bare bones. But it does the trick and I am lazy. As you see the split is even. With the actions of my players the population of undead took the greatest damage. Now that the troglodytes are in combat with them and the cockroach people have control over them, I will reduce their number even further.
But first I'll roll how many "potential" cockroach people will have entered the dungeon. I rolled 14 cockroach people, with one leader as an extra.
There are:
14 cockroach people
17 troglodytes
13 undead of the blue baron

I will now determine how many these factions lost in skirmishes. 1d4 for a good position, 1d6 for a mediocre position and 1d8 for a really bad position.
The undead of the blue baron are already weak and the stronger troglodytes turned on them. Plus the cockroach people have a mayor advantage to them.
I rolled a 5, so there are 8 potential undead left, which is pretty pathetic!
The troglodytes are in a medium position, they don't know how to respond to the spell casting bugs and have lost some warriors against the party. I rolled a one. They're still kicking it, with 16 Troglodytes.
And the newcomers get a great positional advantage. But I rolled a 4. 10 cockroach people, I bet they are pissed for getting their ass beaten by the troglodytes.

As the lair of the cockroach people, I will pick 16. The characters neatly cleaned that room out, and north of it is a pile of corpses that are pretty interesting to the cockroaches.

The lair of the other two factions are 10 for the troglodytes and 20 for the blue baron.

I'll fill room 1 by hand. I know that my players will use this entrance to enter the dungeon, because they didn't have searched for other entries.
In this room will be the single dead Troglodyte. Around him 3 dead, weird and naked undead with burlap sacks over eaten faces. That's unusual. The players will immediately get that something's up. kinda in their face.
In 3 I will put a handful of Troglodytes, who play with some cockroach corpses and some troglodyte guards in 9.
In 15 and 17 will be some cockroach person guards.
12 will be filled with defensive undead of the blue baron.
Each faction guards their lair against the two other.

with that done, I'll create a small "special" table.

For combat, decide who is winning

8 on the special table counts as a draw.

I'll roll some loot for the new faction, to drop some in their lair and scattered around the dungeon. They got a treasure type of F.
I just rolled 12000 silver coins (I use silver standard) and nothing else. That's just lazy. I'll transform it into some weird pieces of jewellery/tools and magical components. They got a makeshift laboratory with 4000$$$ worth of empty scrolls, oils and other icky ingredients, and a sack of weird bronze dentistry-looking tools, rings, ocular apparatuses and small knifes worth 8000$.
Not a lot for such exotic items, but it's okay. My players are rich enough at the moment.

Now we can go and iterate through the cleared rooms and fill them with stuff.
First I drop some monsters in the rooms I'd wanted to fill by hand, namely 16, 3, 9, 15, 17 and 12.
In 3 I rolled four troglodytes, in 9 three.
In 16 I'll put 5 cockroach people,1 leader, 4 zombies, 1 ghoul,
the magic lab and the rest of the crafts and tools that I don't roll for other rooms.
For 15 I rolled three cockroach people and 4 skeletons.
For 17 I rolled another three cockroaches, 3 skeletons, 3 zombies
In 12 I'll put 6 vicious ghouls.

Now I'll use the b/x random Dungeon Room Content table the other cleared rooms. I roll first and then fill them afterwards. It will get a bit cluttered here, but thats alright.

now I'll give them life.

2:
This room looks like something has fucking exploded. there are people-sized insect parts lying around. scattered around are bronze tools that look like weird LSD inspired dentistry tools, some are broken and slightly bent and burned. worth 700$.
4: I rolled a 7 on my table, that means the room is blocked. This room is inside troglodyte territory, between a guards and the lair. So it wouldn't make sense for them to block off their only escape route, so I'd say that these troglodytes are actually cut off from their lair, because some exploding cockroaches collapsed the room.
11: four Troglodytes
13: again troglodytes, now three.
14: The trap-room. Being near the lair of the cockroaches, I guess the cockroaches laid some trap to catch some undead or to kill some troglodytes.
Alright, the ground is littered with poisoned bronze caltrops. kills troglodytes and makes undead a tiny bit less mobile. save or die. serves as some nice loot for my murderhobos, too.
19: I rolled a five. An old battlefield between Troglodytes and Cockroaches. Alright. there are two dead cockroaches there and one wounded troglodyte, chilling out. He isn't in a condition to fight. The two cockroaches got spell books, don't forget!

Well.
As you can see, creating a special table was really overkill, for only rolling twice. But it helped me, I had a rough guideline which I could give sense depending on the context around it. I am sure this technique could be useful if that dungeon weren't that small!
Hope you guys can get at least something out of this. I'd be glad if you guys commented, maybe gave some constructive critique, things like that.

I'm a bit tired, so I just post without checking. Really annoying that I have to keep a dictionary at hand just because my english is so damn terrible. I hope this has at least some charm to you and isn't terribly annoying. I love you all!
See ya! 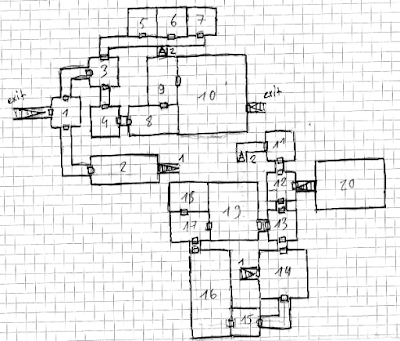